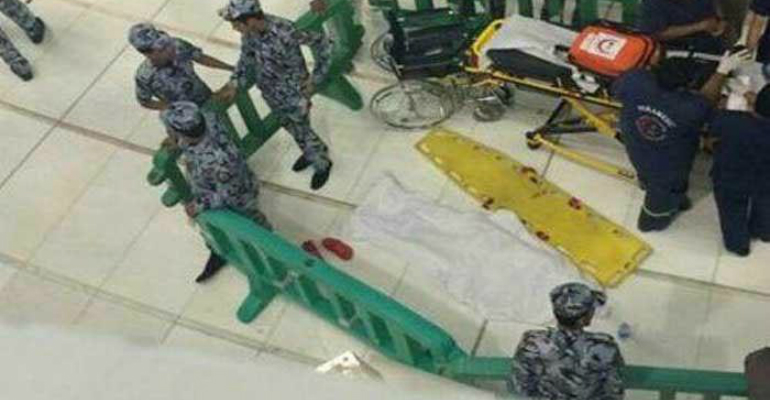 There have been reports of a man committing suicide by jumping off one of the upper floors in Masjid Al-Haram, Makkah. (1) This incident was shared over various social media accounts and broadcast via WhatsApp.

Several people have asked about the ruling of suicide, and there is confusion over whether it can be said that this person is in the Fire and will never enter Paradise. By the permission of Allah, I have written the following points to shed some light on the confusion:

What is the ruling on suicide?

Whoever kills himself with something in this world will be punished with it on the Day of Resurrection. (2)

The above Ahaadeeth prove that committing suicide is a severe action for which there is a severe punishment set out by Allah.

What is the difference between an action being a Major Sin and Major Kufr?

The difference between them both is that Major Kufr is disbelief, it invalidates a person’s Islam and takes such a person out of the fold of Islam. If he dies upon Major Kufr without repenting, he dies as a Kaafir (non-Muslim) and will not enter Paradise.

On the other hand, a Major sin is a severe action for which there is a severe punishment, but the person remains a Muslim. Even if such a person did not repent from his sins, perhaps Allah will forgive him out of his mercy, or punish him. As long as he dies upon Tawheed, he will enter Paradise.

Is suicide a Major Sin or Major Kufr?

The above Ahaadeeth prove that suicide is Haraam (forbidden), however the scholars have agreed it is a Major sin and not Kufr. This is because suicide does not contain anything which contradicts Imaan and Tawheed.

“Any Muslim who kills himself mistakenly is excused and does not sin. However, any Muslim who kills himself intentionally (i.e. suicide) due to his personal situation – as long as he is not resentful of the decree of Allah – is not a Kaafir. Rather he has committed a Major Sin for which there is the threat of the Fire. Ultimately his affair is with Allah – if Allah wills he will pardon and forgive him, and if He wills he will punish him.” (4)

Why does the Hadeeth say he is in the Fire?

There are many Ahaadeeth which mention the punishment of the Fire for those who commit Major Sins such as murder, dealing with interest (Usury), adultery, alcoholism, gambling etc… This is similar to the Ahaadeeth mentioned above regarding suicide. Although these Ahaadeeth mention the Fire, they do not necessitate that these sinners will remain in the Fire for eternity. As a general principle, every Muslim who dies upon Tawheed will eventually enter Paradise, but before that whether he is punished or not is with Allah.

Also, these Ahaadeeth are general, and we are not allowed to specify them to any individual Muslim. They remain upon their generality.

Can we say this person who committed suicide is in the Fire?

Despite suicide being a major sin for which there is a threat of the Fire, this does not necessitate that this person has left the fold of Islam and dies upon Kufr.

The Aqeedah of Ahl As-Sunnah is that we never declare any particular Muslim to be a non-Muslim on account of Major Sins. This was the belief of the Khawaarij. They believed: whoever commits a major sin, has left the fold of Islam and therefore enters the Fire eternally.

However we affirm the punishment and reward generally, but we can never say with certainty that so and so Muslim will definitely enter the Fire. This is according to whatever Allah wills, he may pardon such a person or He may punish him, and Allah never wrongs a person. The only condition is that the person died as a Muslim upon Tawheed.

Should the Janaazah be prayed over a person who commits suicide?

As we have established above, a person who commits suicide dies as a Muslim and Janaazah Prayer is performed for every Muslim. However, to show the seriousness of this sin it is better for the people of knowledge and status to not offer the Janaazah Prayer whilst at the same time encouraging the rest of the Muslims to do so.

This is taken from the action of the Prophet (sal Allaahu alayhi wa sallam) himself. Jaabir Ibn Samurah (radhiAllaahu anhu) said:

The Prophet (sal Allaahu alayhi wa sallam) passed by a man who had killed himself with an arrow, and he did not pray [Janaazah] upon him. (5)

An-Nawawi commented on this Hadeeth saying,

“This Hadeeth is implied to dissuade people from suicide, similar to the Prophet (sal Allaahu alayhi wa sallam) not praying Janaazah upon a person who died with a debt even though he ordered the rest of the companions to do so. He only did this to scare people away from being in debt, not because the person was a Kaafir (non-Muslim)…” (6)

So the Muslims in general should pray Janaazah over every Muslim even if he committed suicide, but the people of knowledge and status in that area should not do so, only to show the rest of the Muslims how repulsive a sin this is.

How should we react when a Muslim commits suicide?

There are several guidelines we should bear in mind when we hear of a Muslim committing suicide:

O Allah, forgive us, our parents, teachers and the Muslims. May peace and salutations be upon our beloved Prophet, his family, companions and all those who follow his way until the Day of Resurrection.

(1) The incident was unfortunately recorded by a number of people and spread through Youtube.

Note: The Arabic word used in the Hadeeth is خالدين which literally means ‘forever,’ but it can also mean ‘a very long time’.

The Salaf would pass by such Aayaat and Ahaadeeth without delving into them for the fear of lessening the severity of the word.