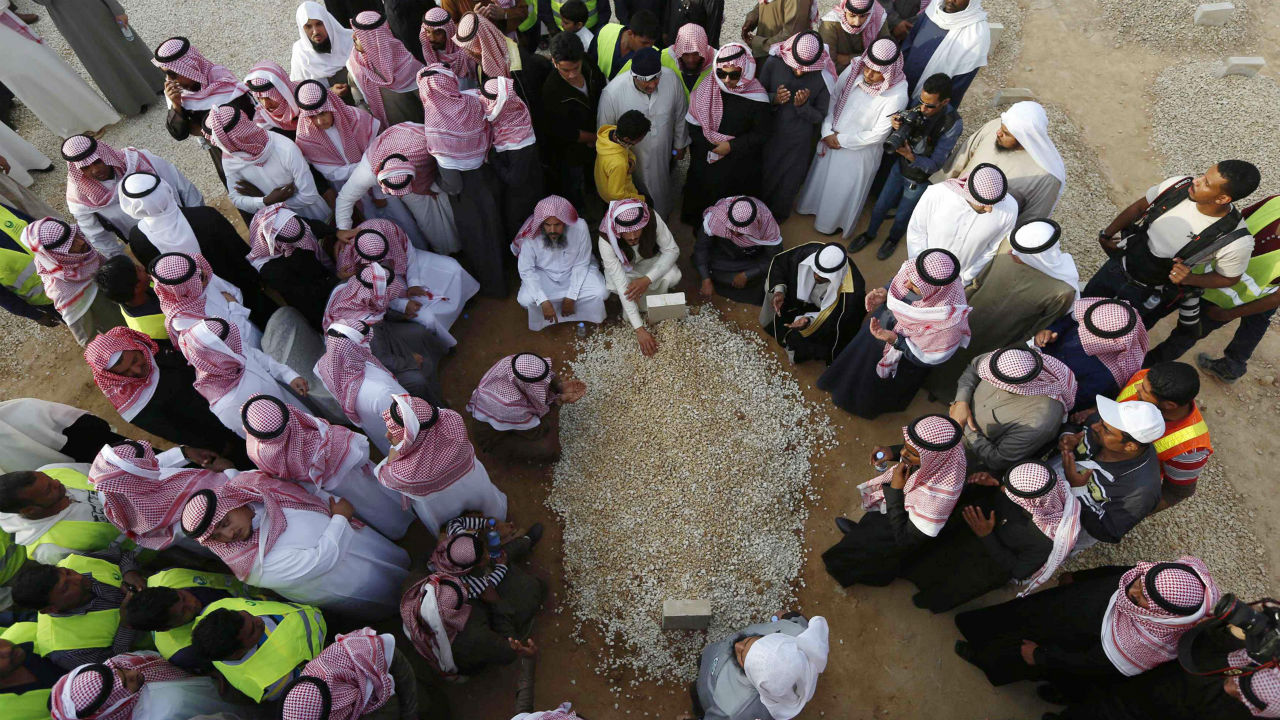 King Abdullah of Saudi Arabia passed away on Friday 23rd January, 2015. May Allah have mercy upon him, forgive his sins and reward him for his good deeds.

Many people – Muslims and non-Muslims – were amazed to see the simplicity of his funeral. A man who owned 20% of the world’s oil reserves, had an estimated wealth of £12 billion and lived in lavish palaces. Yet his funeral was simple and minimalistic, his final resting place being an unmarked grave in a public graveyard where citizens and rulers alike are buried.

There was no lowering of black flags, no public mourning, no symbolic ceremony, no music and flowers, and no tomb; instead he lay on the floor, shrouded in white cloth, a simple prayer was offered in the local Masjid and then he was rushed to be buried.

The funeral procession was reported in various media outlets, such as the BBC. In their reports, they mentioned:

“His burial was conducted in line with the traditions of Wahhabism – the ultra-conservative form of Sunni Islam followed by the kingdom – where funerals are austere and simple.”[1]

“Wahhabism” and “Wahhabiyyah” are terms being used nowadays, by certain groups of Muslims as well as non-Muslims.  They are terms used loosely to confuse the masses and keep them away from the true teachings of Islam. The concepts of Tawheed (monotheism in Worship) and warning against Shirk (directing any act of worship to other than Allaah) – which are core tenets of Islam – are branded as “Wahhabism,” as if such concepts were concocted in the 1700s, with the movement of Muhammad Ibn AbdulWahhaab. [2]

The reality however is, that this message of Tawheed wasn’t initiated by Muhammad Ibn AbdulWahhaab, neither is it specific to the “Kingdom,” rather it is the very call of every Prophet and Messenger.

{We sent not before you any messenger except that We revealed to him that, ‘There is no deity except Me, so worship Me’} [21:25]

The above concepts and indeed the manner in which the funeral of King Abdullah was performed is not “in line with traditions of Wahhabism” rather these are the very teaching of Islam, the practice of all true Muslims and the Sunnah and guidance which Prophet Muhammad (peace be upon him) left behind.

The Prophet of Islam left behind a legacy which calls to simplicity in funerals without the meaningless ceremonies and symbols of present day funerals. Emphasis is placed on supplicating and seeking forgiveness for the deceased as opposed to lavish funerals; people are encouraged to attend the Funeral Prayer as opposed to the after-party of food and drink; ideals of equality and egalitarianism are promoted, such that every person is shrouded in simple white cloth and buried in the same manner.

The Prophet (peace be upon him) would encourage the funeral processions to be done quickly without unnecessary delay. He said,

Hasten with the funeral procession, if the deceased is righteous, you are hastening him to good. If not, then it is evil you are removing from your necks. [3]

The Prophet (peace be upon him) ordered the Muslims to maintain uniformity in graves, they should be of the same level without plaques and building of tombs. [4]

Indeed he sent his trusted companion, ‘Alee ibn Abi Taalib and ordered him:

Do not leave any image without defacing it or any built-up grave without levelling it. [5]

The manner in which the funeral of King Abdullah was performed was not “Wahhabism,” “an ultra-conservative,” “ultra-orthodox” form of “Sunni Islam” which is specific to the “Kingdom”.  Rather these are the teachings of Islam which every Muslim must conform to; this is the guidance of the Prophet of Islam.

They call us Wahhabis, they call our way Wahhabism as if it is something specific [to us]; this is a clear error…

We are not a people of a new school of thought, or a new creed. Muhammad Ibn AbdulWahhaab did not come with anything new. Our creed is the creed of the righteous predecessors which has been narrated in the Book of Allah and the Sunnah of the Messenger. It is what the early righteous Muslims (the Salaf) were upon.

We respect and honour the four Imaams, with us there is no difference between Maalik, Shaafi’ee, Ahmad and Abu Haneefah. [6]

The enemies of the Da’wah, have confused the message of Shaykh Muhammad Ibn AbdulWahhaab with the term ‘Wahhabiyyah,’ a doctrine that does not exist here. [7]

{Exalted is your Lord, the Lord of Honour, above what they describe}

{Peace be upon the Messengers}

{Praise to Allah, Lord of the Worlds}

Written by the one in need of Allah

[4] This has been narrated in the Hadeeth of Jaabir, who said “The Messenger of Allah (peace be upon him) forbade that the graves should be plastered or they be used as sitting places (for the people), or a building should be built over them. “ Collected by Muslim, under the chapter: “It is forbidden to plaster the grave or constructing anything over it.”

[6] In a sermon he delivered to the pilgrims in Hajj 11th of May, 1929. This has been reported in the Arabic book: دعوة الإمام محمد بن عبد الوهاب سلفية لا وهابية

‘The Call of Imaam Muhammad Ibn AbdulWahhaab is Salafiyyah not Wahhabiyyah’ by Ahmad al-Hussain.