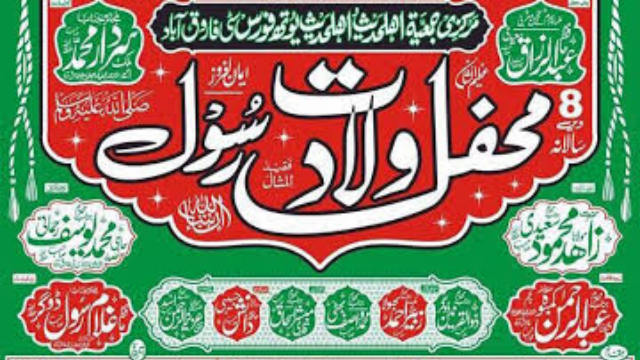 All praise is for Allaah, the Lord of the Worlds. May peace and blessings be upon our Prophet Muhammad, and upon all his family and companions. Thereafter,

However loving the Prophet (sal Allaahu alayhi wa sallam) is not through slogans, celebrations, poetry of praise, nor singing and songs.

{Say, ‘Obey Allah and the Messenger.’ But if they turn away – then indeed, Allah does not like the disbelievers} [03:32]

{O you who have believed, obey Allah and obey the Messenger and those in authority among you. And if you disagree over anything, refer it to Allah and the Messenger, if you should believe in Allah and the Last Day. That is the best [way] and best in result} [04:59]

{Say, “Obey Allah and obey the Messenger; but if you turn away – then upon him is only that [duty] with which he has been charged, and upon you is that with which you have been charged. And if you obey him, you will be [rightly] guided. And there is not upon the Messenger except the [responsibility for] clear notification.”} [24:54]

{O you who have believed, obey Allah and obey the Messenger and do not invalidate your deeds} [47:33]

{Say (O Muhammad to mankind): ‘If you truly love Allaah then follow me, And Allaah will love you and forgive you your sins. Allaah is Oft-Forgiving, Most Merciful.’} [03:31]

Whoever turns away from my Sunnah is not from me

Upon you is my Sunnah, and the Sunnah of the rightly guided Caliphs after me. Bite onto it with your molar teeth. Be aware of innovated matters, every innovated matter is a Bid’ah, and every Bid’ah is misguidance.

From the matters which people have innovated today: specifying the birthday of the Prophet (sal Allaahu alayhi wa sallam). This is an action which is not found in the Book of Allaah, nor the Sunnah of the Messenger of Allaah. The Prophet (sal Allaahu alayhi wa sallam) lived for 63 years and it has never been narrated that he specified his birthday, nor celebrated it.

The Companions lived many years after him, never did they specify his birthday. They are the Rightly Guided Caliphs whom the Prophet (sal Allaahu alayhi wa sallam) ordered us to follow and implement their Sunnah.

Similarly the Taabi’een who followed them in goodness, they did not specify the Mawlid, nor the Atbaa’ At-Taabi’ee. Also the Imaams of the religion [did not specify] the Mawlid; Imaams such as Sufyaan Ath-Thawree, Al-Awzaa’ee, Abu Haneefah, Maalik, Shaafi’ee and Ahmad. Neither did Abu Dawood, At-Tirmidhee, Al-Bukhaaree, Muslim, Ibn Maajah nor An-Nasaaee specify that day. In fact none of the Imaams of the early virtuous generations whom the Prophet (sal Allaahu alayhi wa sallam) praised specified this day.

So specifying the birthday of the Prophet (sal Allaahu alayhi wa sallam) is an innovated action according to the agreement of the Muslims. It is not permitted for anybody – whoever he is – to say regarding the Mawlid that it is legislated, and that a person worships Allaah the most high with it. Nobody should think that [specifying his birthday] demonstrates love of the Messenger of Allaah (sal Allaahu alayhi wa sallam) – despite that fact that it has no basis in the Qur’an, Sunnah nor in the virtuous early generations.

Amongst the sternest of people in warning against innovations generally – and specifically the Mawlid – are Ahl Al-Hadeeth from Pakistan, India and the Sub-Continent. They are the severest of people opposing innovations; they are the most active of people in spreading the Sunnah. Jami’yyat Ahl Al-Hadeeth have played a crucial clear role in this arena, thereby spreading the landmarks of the Sharee’ah and reviving the Sunnah. By the permission of Allaah, the latter members of Jami’yyat Ahl Al-Hadeeth are following those who precede them.

However what some of the virtuous brothers have recently done has pained me a lot, they organised a “Mehfil Walaadat Ar-Rasool” – a celebration of the birth of the Messenger (sal Allaahu alayhi wa sallam), and just because it is called a different name, this does not change the reality. It does not alter the fact that it is an innovation.

Specifying this night in whichever manner of commemorating is an evil innovation. And if there is sinning such as acts of Bid’ah and Shirk involved in the celebration, then it is evil upon evil.

I know with absolute certainty that Ahl Al-Hadeeth are the people farthest away from innovations and acts of shirk, however by congregating on this night and speaking about the birth of the Messenger in these days – all of this comes under it being an innovation and strengthening the innovation.

This is for a number of reasons:

1. It resembles the people of innovation in what they have innovated
2. The actual date of birthday is not known for definite, neither the month nor the date.
3. It is possible to speak about his birth in any other time apart from this day or month.
4. This action was not done by the pious Salaf in these days nor in this month.
5. Your actions may be a window for other innovations to enter upon Ahl Al-Hadeeth, such that these types of gatherings are organised every year, then it become an ‘Eid. Thereafter, the matter will only increase evil after evil.
6. If Ahl Al-Hadeeth continue with this action without any evidence or authentic Sunnah, then the people of innovation will use this to justify many innovations. They will say to them: Why do you allow innovations for yourself and then you forbid them from us?!

So I encourage my brothers in Jam’iyyat Ahl Al-Hadeeth that they turn away from this action, and that they change the title of their conference to

“The virtue of sticking to the Sunnah and avoiding Bid’ah”

They should mention in it that they are free from the innovation of celebrating in memory of Mawlid An-Nabawi. They should do this as a form of sincere advice for the Ummah, abandoning the path of the ignorant ones.

[TN] I was made aware of a conference being organised by a small isolated group of brothers from Jami’yyat Ahl Al-Hadeeth in Pakistan which was called “Mehfil Wilaadat Ar-Rasool” (a celebration of the birth of the Prophet). Although celebrating the Mawlid was not intended, however such a conference in these days is not something which should be done.

I requested advice from Shaykh Badr (hafidhahullah) and he was kind enough to write this as an advice to them. This is therefore the translation of his advice to some of the brothers from the Jami’yyat, (Note: the translation contains minor changes that have been made with the permission from the author).

The article also contains an advice in general to virtuous brothers who are falling into an error in organising lectures in Rabee’ Al-Awwal on the Seerah of the Prophet (sal Allaahu alayhi wa sallam) or loving the Prophet.

It should be known, as the Shaykh mentioned above, that the innovation is in specifying this month or day and not just celebrating it.

Therefore we should stay away from this, and if any lecture is going to be organised then let it be titled in a way which reflects us exposing this innovation.