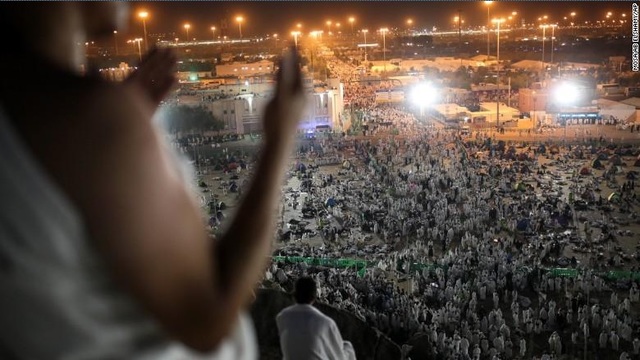 In the name of Allaah, the Most Merciful, the Bestower of Mercy,

We were all saddened and grieved when news of the deaths during Hajj was broadcasted. A mere days prior to Hajj, almost 150 people died due to the collapse of a crane in the Sacred Masjid al-Haraam.

Then on the joyous day of Eid Al-Adhaa, when Muslims around the world were rejoicing, news of a further 800 deaths in a stampede in Mina was broadcasted.

People reacted to this news in various ways. Amongst them were many Muslims who were truly saddened and felt the pain of Muslim families who had lost their loved ones. There were others however who used this as an opportunity to score political points or to attack Islaam.

Amongst those who mocked Islaam as a reaction to this tragedy are those who say: ‘Why didn’t Allah save them?’and ‘Their Pilgrimage was in vain, their own god could not save them.’

In order to reply to such ignorant statements, the following contemplations can be made:

1. The tragedy during hajj occurred due to the Decree of Allaah.

Allaah, the Most High, decrees as He wishes whenever He wishes, and everything that Allaah decrees is due to His great wisdom. In every instance of success or loss, there is wisdom behind it. Sometimes this wisdom is understood immediately, whereas there are other times where the wisdom is not fully appreciated.

{Allaah decides, and there is no adjusting to His decision} [13:41]

2. Life and death are in the Hands of Allaah

From the decree of Allaah, and His complete ability is that He – and only He controls life and death. He gives life and death to whoever He wishes, whenever He decrees.

{There is no deity except Him; He gives life and causes death. [He is] your Lord and the Lord of your first forefathers.}[44:08]

3. Nobody has been guaranteed eternity, nor safety from death

Regardless of how much a person is beloved to Allaah and how high his rank is in worship, death is still decreed for him. Allaah did not bestow eternity upon any human.

Rather, Allaah decreed death for the Prophets and Messengers who were the most beloved people to Him, His greatest Awliyaah and those who reached the epitome of worship.

{Muhammad is not but a messenger. [Other] messengers have passed on before him. So if he was to die or be killed, would you turn back on your heels [to unbelief]? And he who turns back on his heels will never harm Allah at all; but Allah will reward the grateful.} [03:144]

In replying to those who mocked Islam, these very sentiments can be applied to Hajj. Those who died in the tragedy were men and women, like many men and women who have died previous to them. If they die, will you turn on your backs and mock Islam? Know that whoever turns on their backs does not harm Allah at all. Indeed Allaah rewards the grateful.

4. We are Muslims, and we live for the Hereafter

Whilst we live this Worldly life, however our focus is on life after death. We prefer the life which is eternal over a temporary abode. If this is our focus, then our outlook on life – and indeed death – is different to those who disbelieve in the Hereafter.

We therefore believe in recompense, so whoever faces a difficulty or an affliction in this life is rewarded for it in the Hereafter, and its pain is alleviated in therein. In fact our Prophet (sal Allaahu alayhi wa sallam) told us,

Any believer who is pricked by a thorn will have his rank raised due to it. [1]

5. The efforts of the Pilgrims will never be lost

Many of the Muslims who died during the Hajj tragedy did so without actually completing their Hajj. However they did not die in vain, and their actions will not go to waste.

{They receive good tidings of favour from Allah and bounty and [of the fact] that Allah does not allow the reward of believers to be lost} [03:171]

{Indeed, he who has Taqwa of Allaah and is patient, then indeed, Allah does not allow to be lost the reward of those who do good.”} [12:90]

6. Their death was an honourable death.

Our brothers and sisters who died, died a death of honour. Allaah brought them to an honourable sacred place – Makkah. He chose for them honourable days – the blessed days of Hajj. He allowed them to be in an honourable state- the state of Ihraam and worship.

When He fulfilled all of this as a blessing upon them, He decreed that they breathe their last breaths with all this honour.

7. Allaah decreed that they died on Friday or Thursday night.

“Whoever dies in the day of Friday, or the night [before] Friday, will be saved from the tribulation of the grave” [3]

8. They died as people travelling a journey and isolated from their families.

The Prophet (sal Allaahu alayhi wa sallam) gave us the glad tidings of how close a traveler is to Allaah, when he turns to Him, such that their supplications are not rejected. [4]

9. They will be resurrected according to their death.

They died in a state of performing good deeds: some died in Ihraam, others whilst worshipping whilst others remembering Allaah – all in the sacred House of Allaah.

Whoever dies in a state of Ihraam will be resurrected pronouncing the Talbiyah. [5]

Every person will be resurrected according to what he was doing. [6]

9. Their death was an honour not a tragedy.

Perhaps this contemplation will not be truly appreciated by a person who disbelieves in Islaam. The dream of every Muslim is to die in an honourable way – in worship and in the service of Islaam. Every single Muslim yearns and desires a death in the sacred city of Makkah; and they were granted this desire.

10. There still remains the hurt of a demise

We hope that the Saudi authorities will make every effort to investigate the tragedy, learn lessons and then make further efforts to ensure that such accidents are not repeated – inshaAllah.

11. A final contemplation and reminder for those who remain behind.

In the deaths of our brothers and sisters who died during Hajj 2015 is a reminder to us all. Consider the decree of Allaah, and the reality of life and indeed death- that it is in the Hands of Allaah.

How many amongst the Pilgrims bade farewell to their families for a few weeks, yet never returned to them?

How many amongst them had bought presents, gifts and toys for their children yet were not able to present them?

Therefore, the ultimate reality is that our reckoning and returning is to Allaah, and thus we should focus on His pleasure and His worship.

{Fear a day when you will be returned to Allah. Then every soul will be compensated for what it earned, and they will not be treated unjustly.} [02:281]

We ask Allaah to forgive the deceased Muslims, and to accept their righteous actions.

O Allaah, forgive and have mercy upon them; excuse and pardon them, and make honourable their deaths

O Allaah, expand their entry into their graves; cleanse them with water, snow, and ice.

O Allaah purify them of sin as a white robe is purified of filth.

O Allaah, admit them into your paradise, and, protect them from the punishment of the grave and the torment of the Fire.