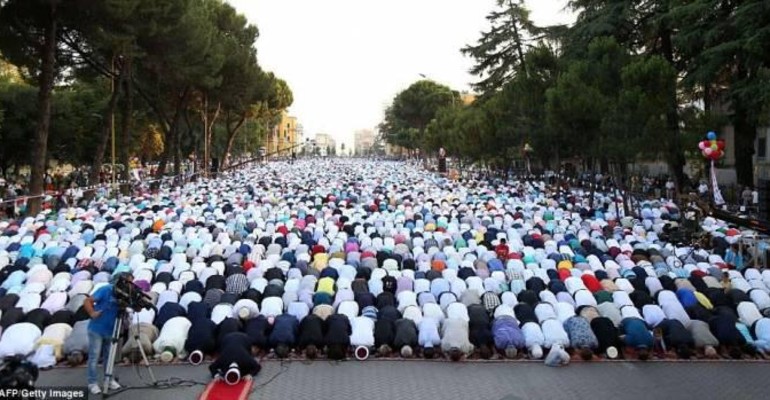 It is the Sunnah of the Prophet (sal Allaahu alayhi wa sallam) and his virtuous Companions (may Allaah be pleased with them) to pray the Eid Prayers in a Musallah (an outdoor Prayer Area) and not inside the Masjid.

1. Abdullah Ibn Umar (may Allaah be pleased with them both) said, “The Prophet (sal Allaahu alayhi wa sallam) would leave early morning to the Musallah (outdoor Prayer Area), whilst a metal headed walking stick would be carried in front of him. It would then be planted in the Musallah in front of him and he would pray towards it.” [al-Bukhaaree]

2. Abu Sa’eed al-Khudree (may Allaah be pleased with him) said, “The Messenger of Allaah (peace and blessings of Allaah be upon him) used to go out to the Musallah (outdoor Prayer area) on the day of al-Fitr and al-Adha. The first thing that he did was to pray, then he would move away and stand facing the people, when the people were (still) sitting in their rows, and he would exhort them and advise them and issue commands to them. If he wanted to dispatch an army he would do so, and if he wanted to issue some commands, he would do so; then he would leave.” [al-Bukhaaree &  Muslim]

3. Abdullah Ibn Abbas (may Allaah be pleased with them both) narrated that the Prophet (sal Allaahu alayhi wa sallam) would offer Eid prayers in an open area (in congregation with the believers) in Madeenah, this was near the house of Katheer Ibn Sallt. [Ahmad]

4. Al-Baraa Ibn ‘Aazib (may Allaah be pleased with him) said,“The Prophet (sal Allaahu alayhi wa sallam) went out on the day of [Eid] al-Adhaa to the Musallah (outdoor Prayer Area) and prayed two Units of Prayer.” [al-Bukhaaree]

As for the hadeeth which has been narrated by Abu Hurayrah (may Allaah be pleased with him), in which he states “we were afflicted with rain on the day of Eid, so the Messenger of Allaah (sal Allaahu alayhi wa sallam) led us in Prayer in the Masjid.” [Abu Dawood]

This hadeeth clearly shows the permissibility to pray inside a Masjid for a particular excuse such as bad weather. However the base ruling is the preference to pray outside in the Musallah.

By organising a communal prayer outdoors in a Musallah for all Muslims – men, women & children, we are reviving and implementing the Sunnah of the Prophet (sal Allaahu alayhi wa sallam), his companions and the great scholars thereafter.

By doing so, we unite the hearts of the Muslims, bring them together and publicise the religion of Islaam.

Umm Atiyyah (may Allaah be pleased with her) said, “The Messenger of Allaah (sal Allaahu alayhi wa sallam) ordered us to exit (i.e. to the Musallah for Eid Prayer) for both al-Fitr and al-Adhaa. [He ordered] the young adolescent girls, menstruating women as well as the virgins. As for the menstruating woman, [they were ordered] to stay away from the actual Prayer but attend in order to witness the good and the supplications of the Muslims”

I said, “O Messenger of Allaah, maybe one of us does not possess the Jilbaab?”

He replied, “Let her [Muslim] sister lend her a Jilbaab. “[Al-Bukhaaree & Muslim]

However, it is important for Muslim women to maintain the Islamic Hijaab in relation to their clothing, adornments and perfume. It is also obligatory upon the men to lower their gaze and avoid free mixing with women.

May peace and blessings be upon our beloved Prophet Muhammad, his family, companions and all those who follow his guidance until the Day of Resurrection.