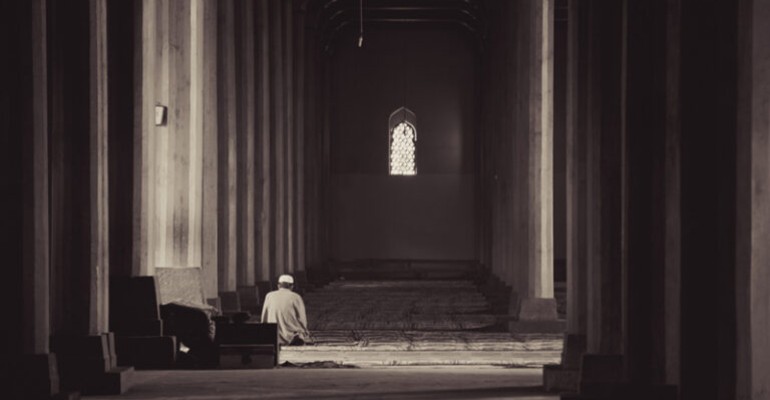 From Muḥammad Ibn Ṣāliḥ Uthaymīn to the noble brother… [1] may Allāh, the Most High, preserve him

Your correspondence – dated to the last month – reached us, and as for your question regarding the ruling of saying the Adhkār out aloud after obligatory Ṣalāh, and how it is said:

The response: saying Dhikr loudly after the obligatory Ṣalāh is the Sunnah, as has been proven from the Ḥadīth in Al-Bukhārī upon the authority of ‘Abdullāh Ibn Abbās, that the practice at the time of the Prophet ﷺ was to raise the voice when people finished the obligatory Ṣalāh.

“I used to know people had finished their Prayers due to hearing it (i.e. the Dhikr).

This narration is from the Aḥādīth of ‘Umdat [al-Aḥkām].

Also in the Ṣaḥīḥ (Al-Bukhārī & Muslim) upon the authority of al-Mughīrah Ibn Shu’bah who said:

I heard the Prophet ﷺ say, after finishing Ṣalāh: Lā ilāha illa Allāh wahdahū lā sharīka lahū  (There is no deity worthy of worship except Allāh, He is alone and has no partners).

[The point is] that it is not possible for a statement to be heard unless the person saying it does so loudly.

This view – of saying the Adhkār out aloud – has been chosen by Shaykh al-Islām Ibn Taymiyyah (may Allāh have mercy upon him), and a group from the Salaf and those who came after them. This is due to the Aḥādīth of Ibn Abbās and al-Mughīrah (radiAllāhu anhumā).

Saying the Adhkār aloud is general for every legislated Dhikr said after Ṣalāh, regardless of whether it is Tahlῑl [2], Tasbῑḥ [3], Takbῑr [4] or Taḥmῑd [5]. This is due to the generality of the Ḥadīth of Ibn Abbās . There is nothing narrated from the Prophet ﷺ that would differentiate between Tahlῑl and the other Adhkār. Rather the Ḥadīth of Ibn Abbās mentions the people would know the ending of the Prayer due to the Takbῑr being said aloud, so this is a reply to those who say that Tasbῑḥ, Taḥmῑd and Takbῑr should not be said loudly.

As for those who believe that saying the Adhkār aloud is a Bid’ah (innovation) then this is a mistake. How could an action which was a continuous practice at the time of the Prophet ﷺ be a Bid’ah?

Shaykh Salmān Ibn Samḥān (rahimahullāh) said, “This (saying the Adhkār aloud) has been established from the actions of the Prophet, as well as his tacit approval. The companions used to say Adhkār out aloud at the time of the Prophet ﷺ after he had taught them, and he would approve of it. This shows they only learnt this from the Prophet ﷺ by him teaching them. So the companions would do it, and he would accept the action from them knowing they were doing it and he did not forbid them.”

If a person forbids making Dhikr out aloud, using the following Āyah as an evidence,

{Remember your Lord within yourself with humility and reverence, without being loud in speech, both morning and evening. And do not be among the heedless} [07:205]

We reply to him: The same one who was ordered to make Dhikr of His Lord quietly (i.e. the Prophet), {within yourself in humility and in fear} he is the same one who used to make Dhikr loudly after the obligatory Ṣalāh.  Is this person more knowledgeable about the explanation of [the speech of Allāh] than His Messenger?

Or perhaps he believes that the Messenger ﷺ knew the intent [behind the Āyah] but opposed it?

Also, [another explanation is] that the Āyah is regarding Dhikr in the morning and evening, {in the mornings and the evenings}. This Āyah is not regarding the legislated Dhikr after obligatory Ṣalāh.

Additionally, Ibn Kathīr clarified the meaning of {without being loud in speech}, that it refers to saying them extremely loud (i.e. shouting).

Also, if a person forbids saying Adhkār out aloud due to the saying of the Prophet ﷺ:

O people be easy with yourselves [when saying Dhikr]. [6]

Also, the context of the Ḥadīth “be easy with yourselves” proves that the Companions used to say the Dhikr very loud such that it would be difficult for them and it was exaggerated. For this reason he said to them: be gentle [upon yourselves] with Dhikr and do not force it. As for saying the Adhkār loudly after Ṣalāh, there is no difficulty nor is it exaggerated.

If a person says: this will irritate and annoy others.  It is said to him: If you mean by “it irritating and annoying” the person who himself is saying it loud because he is not accustomed to saying it loud, then the believer to whom the Sunnah becomes clear will no longer be annoyed or irritated.

If however he means other people in the congregation will be annoyed and irritated, then if there is no person amongst them who came late [and is making up missed Raka’āt], it will have no effect upon them – as is the case. However if there is a person besides you who is making up missed Raka’āt, do not say your Adhkār too loud as to disturb him as it may distract them. If however he is far away from you, your loud Adhkār will not disturb him.

So according to what we have mentioned, it is clear that the Sunnah is to raise the voice when saying the Adhkār after obligatory Ṣalāh, and there is no contradiction between this and other authentic evidences or clear understanding. [7]

I ask Allāh to bestow beneficial knowledge and righteous actions upon everybody; He is near and He responds.

May peace and salutations be upon our Prophet Muḥammad, and upon his family and companions.

[1] It appears this article was originally a written question sent to the Shaykh, and the Shaykh wrote back to him directly. However when the fatwa was compiled in his Majmū’ the name of the questioner was omitted.
[2] Tahlῑl: saying ‘Lā ilāha illa Allāh’.
[3] Tasbῑḥ: Saying ‘Subḥānallah’.
[4] Takbῑr: saying ‘Allāhu Akbar’.
[5] Taḥmῑd: Saying ‘Alḥamdulillāh’.
[6] Narrated by Abu Mūsa Al-Ash’arῑ; Collected by Al-Bukhhārῑ.
Abu Mūsa Al-Ash’arῑ narrated:

We were with the Prophet ﷺ on an expedition. Whenever we ascended a mountain or descended to a valley we would raise our voices with the Takbῑr. So he came close to us and said: “O people, be easy with yourselves. You are not invoking One who is deaf nor absent, rather you are invoking the all-Hearing and the all-Seeing.”

[7] Translators Clarification: This issue is a difference of opinion amongst the scholars. Generally speaking, they had three opinions on whether the Adhkār should be said loudly after Ṣalāh.

The majority of the Madhhabs are of the opinion that the Adhkār are said quietly; the Shāfi’ῑ scholars restricted this further saying that it is said loudly by the Imām and some of the people in order to teach the people, however if there is an annoyance of other people praying then it should be said quietly. This was based on a number of general evidences which recommend for the Qur’ān and dhikr to be recited quietly, such as the statement of the Prophet ﷺ when he heard people reciting the Qur’ān aloud:

“All of you are calling out to your lord; do not irritate each other and do not raise your voices over each other when reciting.” [Collected by AbdurRazzāq in his Musnad].

In any case, a person should be wary and considerate of those who are around him and Allāh knows best.

It should also be noted that saying the Adhkār loudly does not necessitate it being said in congregation as is the practice of some of the people of innovation.