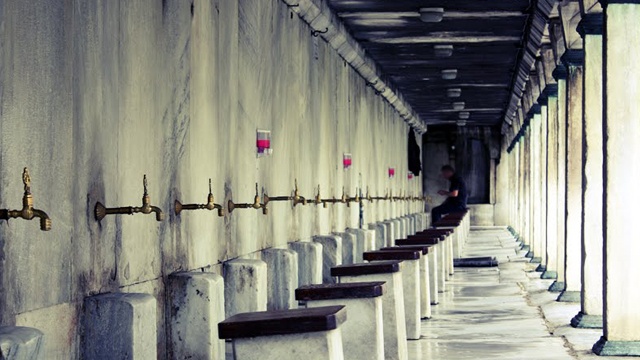 In the name of Allaah, the Most Merciful; the Bestower of Mercy.

During the winter period, questions regarding wiping over shoes and socks are often asked. This issue is one of further importance in the West, where many Muslims work throughout the day and there are no facilities to perform ablution. Traditionally, Muslims wore the ‘khuff’ – socks covering the ankle made from leather. People would wear them due to their durability especially in journeys. However, in modern times the ‘khuff’ is worn much less and people wear a combination of socks made from various fabrics and leather shoes.

This article will provide a number of evidences proving the permissibility of wiping over fabric socks and shoes that cover the ankles. In proving its permissibility, the established principle of legislated ease and applicability of the Sharee’ah is affirmed. [1]

{Allaah intends ease for you, and He does not want to make things difficult for you…} [2:185]

There is no difference amongst the scholars of Islaam regarding wiping over Khuffs, indeed its permissibility is seen as a differentiating point between the majority of Muslims and some of the astray sects such as the Raafidha Shee’ah and the Khawaarij.

Al-Imaam Ibn Daqeeq al-Eed mentioned, “The permissibility of wiping over the khuff is well known to the scholars of the Sharee’ah, so much so that it is considered to be from the apparent symbols of Islaam and its negation has become a symbol of the people of innovation.”[2]

Imaam an-Nawawi also mentioned, “All those who are worthy of being followed have unanimously agreed on the permissibility of wiping over the khuff in both journeys and residence; regardless of whether it is done out of need or not. It is even permissible for a woman who always remains in her house and a weak bedridden person who never walks. The only people to disapprove of it were the Shee’ah and the Khawaarij – their difference is not considered. It has been narrated from Maalik in many narrations; what is well known from his school of thought, is like the majority of schools of thought; that wiping over the khuff has been narrated by a large number of companions that cannot be enumerated. Hasan al-Basree (may Allaah have mercy on him) said, ‘seventy from amongst the companions of the Messenger of Allaah (sal Allaahu alayhi wa sallam) have narrated to me that he used to wipe over the khuff” [3]

It is enough therefore to mention one authentic narration regarding this; Mugheerah bin Shu’bah narrates, “the Prophet (sal Allaahu alayhi wa sallam) performed Ablution; I descended from my mount in order to remove his khuff and he said, ((leave them as they are, indeed I put them on upon purity [of ablution])). He then wiped over them.” [4]

Wiping over fabric socks and shoes

‘Asaaib refers to what is wrapped around the head such as a turban, bandage or towel.
Tassaakheen refers to anything which keeps the feet warm and covered such as khuff, fabric socks and so on.

3. On the authority of Aws ibn Abee Aws narrated that ‘the Messenger of Allaah (sal Allaahu alayhi wa sallam) performed ablution and wiped over his shoes and feet.’ [7]

4. Ibn Umar (may Allaah be pleased with them both) stated, “I saw the Messenger of Allaah (sal Allaahu alayhi wa sallam) wearing them – i.e. leather shoes – he performed ablution and then wiped over them” [8]

5. Ishaaq ibn Rahawayh said, “The Sunnah of the companions of the Prophet (sal Allaahu alayhi wa sallam) as well as the Taabi’een after them has been such that they [permitted] the wiping over the socks; there is no difference amongst them in it.” [9]

6. Jamaal ad-Deen al-Qaasimee said, “This issue, the issue of wiping over the socks, is well known amongst the famous scholars of Fiqh; it has been legislated by the narrated ahadeeth; it is the way of the Companions, Taabi’een, the Imaams of Ijithaad and all of the narrators of Ahadeeth” [10]

Conditions of wiping over fabric socks

1. A person should be in a state of Purity, having performed Wudhu or Ghusl prior to wearing socks.

2. The socks must reach and cover the ankles.

3. They must be thick socks and not see through. If there are is a small hole(s), then this can be permissible due to it being very common.

4. The period allowed for wiping over them should be no longer than a day and night for a resident person, and three days and nights for a traveller. [11]

All praises belong to Allaah; May the peace and blessings of Allaah be upon the Prophet (sal Allaahu alayhi wa sallam) and all those who adhere to his guidance.

[1] This aspect of the Sharee’ah – ease and applicability – has very much come to the forefront in recent times, where some people have used – or misused – it in order to establish that which has no basis in the Sharee’ah. Examples of such rulings are allowing women to remove their Hijaab, taking part in Usury and interest based transactions and in general allowing people to leave the Obligations of Islaam.

When applied properly, this principle is a proof of the Sharee’ah; the laws of Islaam prove its ease and applicability and the opposite is not true (i.e. to invent laws basic it upon ease.)