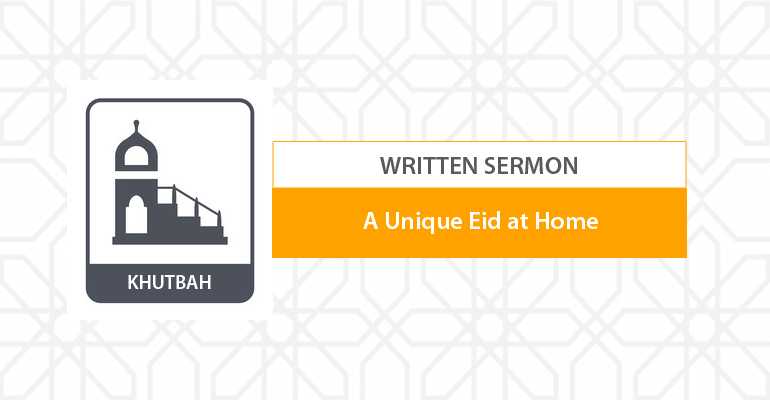 A concise sermon which can be used as a resource for students or workers who may be delivering a Khutbah at their local Musalla. The file can be viewed, downloaded electronically or printed off.

Note: This Khutbah was specifically written for Eid al-Fitr (2020) during COVID lockdown, as a resource for those families who will be performing Eid Prayer at home.

The Eid Prayer is a loud prayer consisting of 2 Rak’ah. In the 1st Rak’ah, a person says Takbīrat at-tahrīm out aloud to begin the Salāh, and then says a further 7 Takbīrāt. He/she then recites Sūrah al-Fātihah and another Sūrah aloud.

In the 2nd Rak’ah, 5 Takbīrāt are said aloud after the Takbīr for standing up. Again, Sūrah al-Fātihah and another Sūrah is recited aloud. The Prayer is completed in the normal manner with Rukū’, Sujūd and Taslīm.

After this, some of the scholars have encouraged for a short sermon to be given.It is only one Khutbah, given immediately after the Salāh.