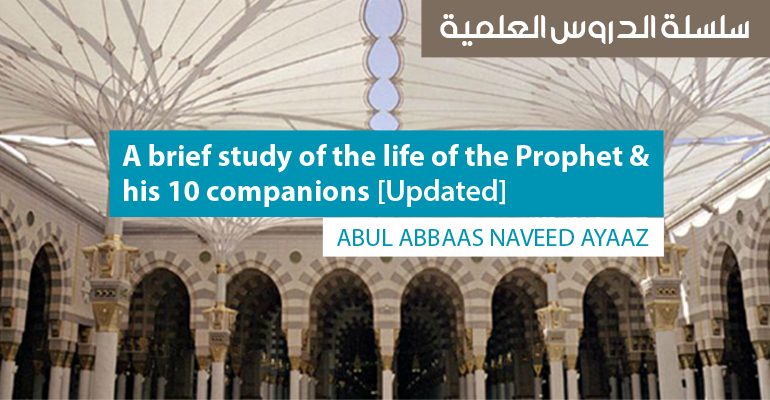 Available in English under the title:”Short biography of the Prophet and his ten companions”, published by Darusalaam.

It is recommended for the listener to purchase the book and study it along with the lessons.

Lesson Nineteen: The paternal uncles of the Prophet (sal Allaahu alayhi wa sallam); who amongst them accepted Islam and who did not inc. detailed biographies of Hamza, Al-Abbaas and Abul Fadhl; the story of Abu Talib and Abu Lahab; Lessons and benefits regarding the upbringing of our children. Download Lesson 19

Lesson One: Introduction to the science of the Prophetic Seerah. The lesson also contains: The meaning of ‘Seerah’; The importance of teaching the Seerah to our children; 10 profound benefits in studying the Seerah of the Prophet (sal Allaahu alayhi wa sallam).
Download Lesson 1

Lesson Two: How to study Seerah; The importance of gradual advancement when studying Seerah; A mention of the different types of books written about Seerah; The importance of teaching the Seerah to our children; An overview of the book which will be studied; the reason why the author wrote this book; a mention of the ten companions promised Paradise. Download Lesson 2

Lesson Three: The name, lineage, date of birth, father and mother of the Prophet. Other benefits: Is the Kunya Abul Qasim permitted? 18 different opinions with regards to the date of his birth; A discussion about those who died before the Prophet, including his father and mother – were they Muslims? Why Allah chose the Prophet to be from a high noble lineage; Download Lesson 3

Lesson Four: The death of the father, mother and grandfather of the Prophet; the practice of the Quraysh in sending their infants to the desert tribes to be suckled; A mention of Umm Ayman; the two suckling mothers (foster nurses) of the Prophet when he was an infant; the definition of a Yateem according to Islamic law; A great encouragement to sponsor orphans; the step brothers and sisters of the Prophet; Note: there is a mistake in 36:43, it was Abu Sufyan Al-Magheerah Ibn Al-Haarith who was step-brother of the Prophet. Download Lesson 4

Lesson Five: A study of the different names of the Prophet; Some of the descriptions of the Prophet found in the Qur’an; the Great Shafaa’ah (Intercession) is his exclusive right; the care of his grandfather AbdulMutallib and his uncle Abu Talib; a refutation of the Shee’ah who claim Abu Talib died upon Islam. Download Lesson 5

Lesson Six: His character before Prophethood; His marriage to Khadeejah the great love he had for her; the complete story of how revelation first came to the Prophet; the great struggle of our Prophet and his companions in conveying Islam to us. Download Lesson 6

Lesson Seven: The life and Da’wah of the Prophet before Hijrah to Madeenah; the animosity of the Quraysh; a great example of mercy, optimism and positivity in Da’wah; the theme of the Qur’an in Makkah; a refutation of those Islamic/political groups who use Islam as a means to politics or consider the Da’wah of the Prophet to be political; the incentives that were offered by the Quraysh for him to leave his message. Download Lesson 7

Lesson Ten: The death of the Prophet (sal Allaahu alayhi wa sallam); an account of the last blessed days of the Prophet upon this earth; the prohibition of routinely visiting the grave of the Prophet; how the washing, shrouding, Janazah and burial of the Prophet was conducted; the reaction of the Sahaabah to his blessed death. Download Lesson 10

Lesson Eleven: A mention of the sons and daughters of the Prophet (sal Allaahu alayhi wa sallam); Download Lesson 11

Lesson Twelve: The Umrah and Hajj of the Prophet; Benefits from his Farewell Sermon; the beautiful ideals which Islam established; Download Lesson 12

Lesson Thirteen: The first two major battles of Islam; The battle of Badr and Uhud; How the Prophet (sal Allaahu alayhi wa sallam) epitomised Tawheed in the battle of Badr; Download Lesson 13

Lesson Fourteen: The battle of Banu Nadheer and Khandaq (trench); The severe difficulties which the Prophet and his companions faced when digging the trench; Why the Imaan of the Companions increased when the saw the alliance of the Kuffaar against them. Download Lesson 14

Lesson Fifteen: The battle of Khaybar and the Conquest of Makkah; Great examples of the peaceful and wise approach of the Prophet (sal Allaahu alayhi wa sallam) even during wars. Download Lesson 15

Lesson Seventeen: The Messengers and delegates of the Prophet (sal Allaahu alayhi wa sallam); The delegation to Abyssinia; the conversation which took place between Abu Sufyan – as anon-Muslim – and the Caesar of Roma; Download Lesson 17

Lesson Eighteen: The Messengers and delegates of the Prophet (sal Allaahu alayhi wa sallam); The delegation to Maqawqis, the ruler of Egypt, and the debate which took place between him and Haatib (radhiaAllaahu anhu); the delegation to Oman and how he accepted Islam; The delegation to Haudha the Christian ruler of Yamaamah; The sending of Mu’adh Ibn Jabal and Abu Moosa Al-Asha’ree as teachers and Du’aat to Yemen. Download Lesson 18

As-salamu alaykum wa rahmatullah. Is there author of the book supposed to be Abdul Ghani al-Maqdisi? Or is he the same as ibn Qudamah? I can only find these two books for purchase and wasn’t sure if they are the right ones:

Yes it is the book mentioned in both links.

JazakaAllah khayr for notifying us, the issue has been fixed.

The error has been rectified – Jazakallah khayr

As-salamu alaykum wa rahmatullah. Shaykh, you mention in lesson 4 that the prophet Muhammad ﷺ and Abu Sufyan were foster brothers, but I read in Sealed nectar that the Messenger of Allah ﷺ was married to the daughter of Abu Sufyan. Can you please clarify this to me? JazakAllahu khayran

There was more than one person named Abu Sufyan. Our Prophet (sal Allaahu alayhi wa sallam) was married to Umm Habeebah, and she is Ramlah Bint Abu Sufyan Ibn Harb – the father of the virtious companion Mu’awiyah Ibn Abi Sufyan – may Allah be pleased with them all.

JazakAllahu khayran for the clarification, Shaykh. I appreciate these lessons and you taking the time to answer our questions. May Allah make these efforts of yours weighty in your scale of good deeds. Were both Abu Sufyans enemies of Islam initially and did both of them accept Islam at the conquest of Makkah? I think in lesson 4 at 36:43 there is a slip of the tongue because it is said Abu Sufyan the father of Mu’awiyah.

May Allah bless you in your learning and actions. As you mentioned, both were enemies of Islam and accepted Islam later.

I will make a note in the description of the audio pointing out the error – may Allah protect us all.

Assalamualaykum i have not listened to all the talk. Just the first 2. However after reading the description of what the talks contain i see no detailed mention of the battles of the prophet saw (badr. Uhud etc)
This was a major part of his life saw. What is the reason for this

May Allah bless you, the series of lessons is still continuing and lessons are being uploaded on a weekly lessons. We have not yet come to the chapter of the battles which the Prophet (sal Allaahu alayhi wa sallam) partook in.

Note: If you listen to the introductory lesson, it is mentioned we are going through a book, and therefore will follow its content. This book is not set in chronological order, and it is not meant to be an exhaustive compilation of Seerah, rather it is a very brief look at various aspects of the Prophet’s life and the ten companions promised Paradise.

as-salamu alaykum. has this series been stopped or is on hiatus? maa shaa Allah, it is a great series, may Allah سبحانه وتعلى reward you greatly and make this heavy on your scale of good deeds on the Day of Judgment

May Allah reward you for your kind words and Du’a.

The above series of lessons were being taught live in Nelson (Lancashire, UK), however they were stopped by the decree of Allah due to Masjid restrictions during COVID. In the meantime we began an online series studying Riyadh as-Saaliheen. The lessons can be viewed at: http://www.youtube.com/IslamNelson

Once the Masaajid resume as normal, we will resume the Seerah lessons inshaAllah.

As-salamu alaykum wa rahmatullah. JazakAllahu khayran. On page 71 of the book, where it talks about who washed the Messenger of Allah ﷺ , it says the two freed slaves “Usamah bin Zayd and his father Zayd bin Thabit”. can the Shaykh please explain this to me because I think it is not correct because I don’t think Usamah bin Zayd was a slave and also I think his father was Zayd bin Haritha

In any case, it seems to be an error – wallaahu A’lam.