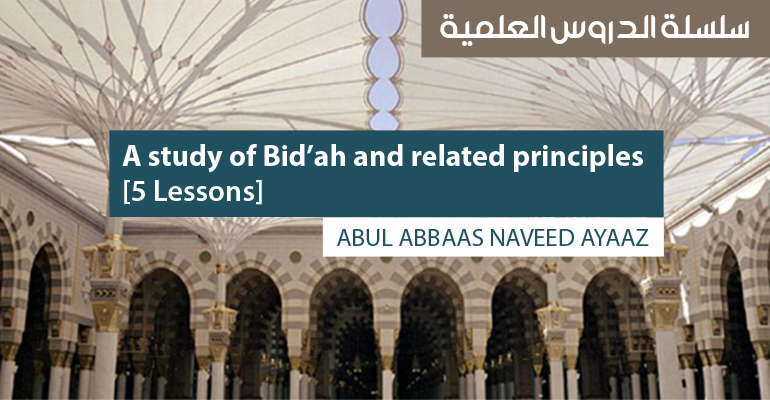 A four part series of lessons in which the definitions, categorisations, rulings, principles and doubts and matters relating to Bid’ah (religious innovations) are studied.

Lesson One: In this lesson you will learn: The linguistic and Islamic definition of Bid’ah; The difference between worldly and religious innovations; when does a Bid’ah take a person out of the fold of Islam; What is the difference between an absolute Bid’ah and a relative Bid’ah; Understanding the statement of Umar: “How good a Bid’ah this action is…”; When not doing an action is also considered to be a Bid’ah; are the dots and vowels in the Qur’an considered to be innovations? Download Lesson 1

Lesson Two: In this lesson you will learn: Why Bid’ah is more severe than personal sins; can we categorise Bid’ah into good and bad?; Six characteristics of an action to be fulfilled, otherwise it is a Bid’ah; the famous narration of Imaam Malik regarding innovating actions with a good intention. Download Lesson 2

Lesson Three: In this lesson you will learn: Ayaat, Ahaadeeth and statements of the Salaf regardng Bid’ah; The difference between Masaalih Mursalah (considerations of public interest) and Bid’ah; The story of how, when and why the Islamic Hijri year was introduced – and why it is not a Bid’ah; Separate rooms for women, minarets, Mihraab and lines for prayer rows – are such actions Bid’ah?; Is everybody who does a Bid’ah labelled as a Mubtadi’ (innovator); Statements of Ibn Taymiyyah, Albaani, Ibn Uthaymeen regarding the label Mubtadi’; A mention of An-Nawawi and Ibn Hajr; The incorrect Manhaj of forcing people to adopt a stance based upon the ijtihaad of a particular scholar. Download Lesson 3

Lesson Four: In this lesson you will learn: Guidelines and principles in expelling a person from the fold of Ahlus Sunnah; When is a Sunnee excused for a mistake, and when is he judged to be from Ahl Al-Bid’ah; The principle of Ahlus Sunnah: Self rectification precedes rectification of others. Download Lesson 4

Lesson Five [Last Lesson]: In this lesson you will learn: Guidelines and principles in boycotting the people of innovations and disobedience; The wisdom of the Prophet (sal Allaahu alayhi wa sallam) in why he boycotted some people and kept relations with others; The obligation of loving and hating for the sake of Allah; A comprehensive clarification by Shaykh Ibn Baaz regarding boycotting the people of innovation. Download Lesson 5