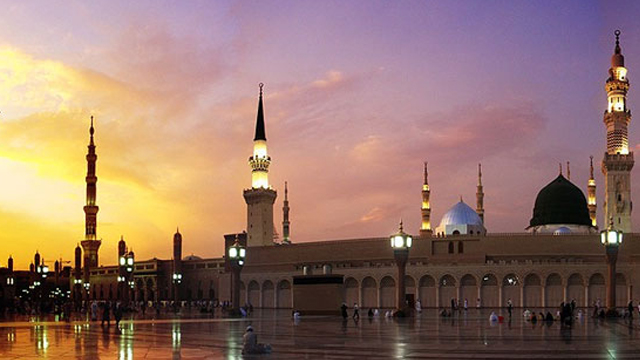 And many of the students of knowledge do not know, let alone the general Muslims, that the reason for the legislation [of this hadeeth]:

…not many [people] know the reason behind this.

The reason is that there was a man from amongst the Companions of the Messenger (‘alayhis-salaam) who used to attend the masjid to pray, however, he would intentionally [choose to] pray in the last row.

Because there was a beautiful woman who used to pray in the first row [amongst the women] and when he would prostrate he would look at her from below his armpit.

[Whilst the Shaykh is narrating this story, at this point one of his students say:]

[To which the Shaykh enquired:]

[And then upon realising what was said, he too said:]

radhi-yAllaahu ‘anhu, and rightfully so, as he was a Companion!

And you may recall [this story].

And I do not mention this [story] in a manner that [would encourage] you to do as they used to do, rather I mention it so that you may know that we are not of their likes in terms of [their] excellence and that Allaah (‘Azza wa Jall) takes a person to account based upon his good deeds in comparison to his bad deeds. So whomsoever’s good deeds outweigh his bad deeds is [considered] from amongst the successful ones, and likewise the opposite. And the greatest example [after the Prophet (sal-Allaahu ‘alayhe wa sallam) for the people are the Companions of the Messenger (‘alayhis-salaam) who accompanied him and heard his statements and often saw [first hand] his example and worshipped [Allaah] as they saw him worshipping [Allaah] and so on.

Footnotes
[1] The hadeeth in discussion is the hadeeth of Abu Hurayrah (radhi-yAllaahu ‘anhu) who said: The Messenger of Allaah (sal-Allaahu ‘alayhe wa sallam) said:

an-Nawawee (rahima-hullaah) said [Sharh Muslim – Page 81 – as-Shu’ab al-Masriyyah print]: As for the rows of the men, then they are general (in meaning), so the best of them are always the front ones and the worst of them are always the last ones. And in regard to the rows of the women, then what is meant by the hadeeth are the rows of the women who are praying (directly) behind the men (without a partition). However, if they were to pray separated from the men (behind a partition), then they are (to be regarded) as the men, (hence), the best of the rows for them will be the front rows and the worst of the rows will be the last ones.

And what is meant by (the term) “the worst of the rows” for the men and the women is the least rewarding and the least in terms of excellence, and the furthest from that which is legally required. And likewise, the (term) best of the rows is contrary (to this).

And indeed, the excellence of the last rows of the women who are in attendance (for the prayer) with the men is due to their being at a distance from the men and from (free) mixing with them and looking at them and (in so doing) their hearts being affected by looking at their actions and listening to their speech and that which is similar (to this); And (likewise), the absolute disliking for the first of their rows is the opposite to that, and Allaah has the complete knowledge.

[2] Researched by Abu Abdul-Waahid Nadir Ahmad: Commenting on this Hadeeth in as-Silsilah as-Saheehah 5/608, al-Albaanee mentions the following points in summary:

a) All the Ahaadeeth indicating that this is the cause for the narration have weakness in them as Ibn Katheer has stated in the explanation of the Surat al-Hijr verse 24, however, combined they strengthen each other and can be used as evidence. So they can be accepted as the reason for the revelation of this verse.

c) As for the issue of this verse being revealed because of a companion, then this companion may have been a hypocrite, one who outwardly proclaimed to be Muslim while concealing his disbelief, or he may have been a new Muslim who did not yet know of Islaamic manners and characteristics.